Election years can be fraught with uncertainty as developments surrounding the candidates, their platforms, and their predicted effects on the economy and markets dominate the news. But should you let this stream of political information influence how you and I manage your retirement investment portfolio?

A lengthy history of empirical research suggests not.

Elections matter, just not in all the ways you might think to an investor. Of course, they hold great importance in upholding the U.S. tradition of democratic, representative government. However, their impact on market returns has historically proven to be negligible, as shown in the chart below. 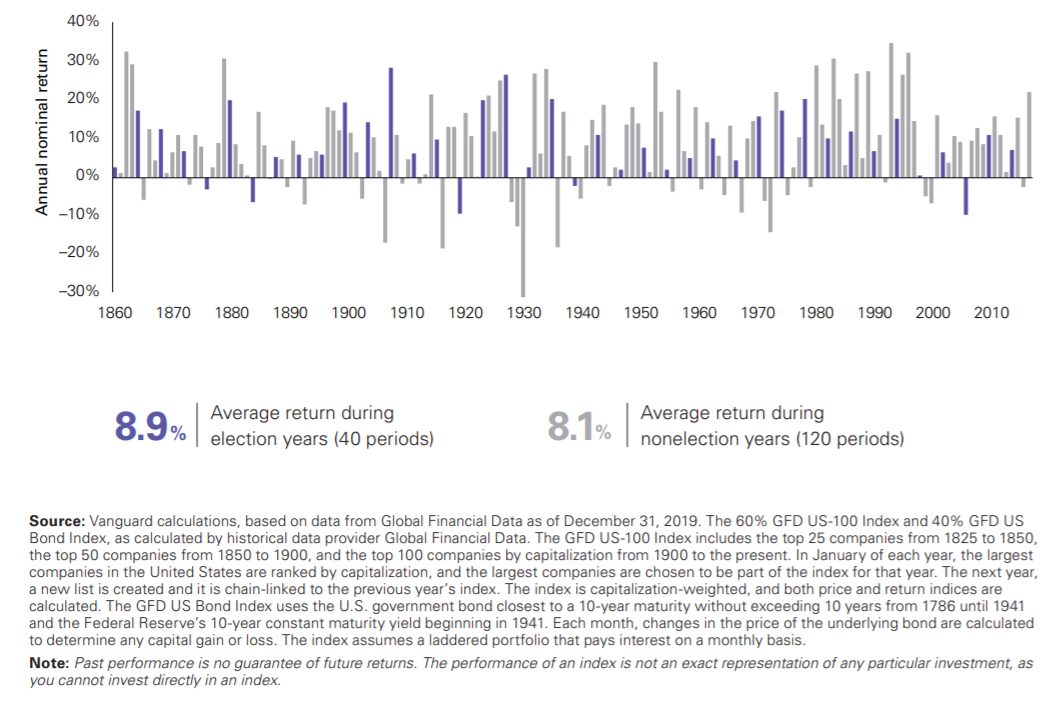 Given the horse race nature of political campaigns, you may think that in months closest to an election, there's a noticeable uptick in volatility. Think again. In actuality, the opposite has been true. From January 1, 1964, to December 31, 2019, the Standard & Poor Index's annualized volatility was 13.8% in the 100 days both before and after a presidential election, which was lower than the 15.7 annualized volatility for the full-time period.

Volatility and the vote: Markets tend to ignore elections

Much has been made about how Republican presidents are better for the market than their counterparts. That's a myth not reality as the numbers suggest something altogether different. In fact, over the last 60 years, with the exception of the Ford and George W. Bush presidencies, the Dow has performed better under Democratic presidents. During this period Donald Trump is the lone outlier at 7.3% annualized return, but this is partly because he inherited a strong market.

The bottom line: Elections are another one of those events that generate lots of headlines but that should not sway you from following the financial plan we created. It’s understandable to have concerns about the election and who assumes the Oval Office. But as far as your portfolio and the markets are concerned, history suggests it will be a nonissue.

Part of successful investing is understanding what you can control, and letting your emotions take a backseat to the retirement plan we put in place. By maintaining perspective, discipline, and a long-term outlook, you can sustain progress toward your financial goals, despite the short-run uncertainty that events such as elections can create.